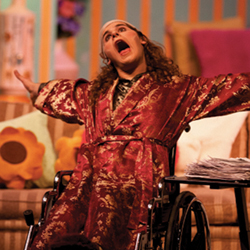 Newberg High School, Oregon presents a fresh adaptation of Moliere's masterpiece, set in 1960s Paris. Originally commissioned for the Oregon Shakespeare Festival in Ashland, Oregon, this play with music follows the efforts of all those who love him to convince Argan, the hypochondriac, not to marry off his daughter to a quack doctor to save money on his medical bills. He learns that he is not really ill, and that life is precious thanks to Toinette, his servant, and Beralde, his brother and that all we have is now.