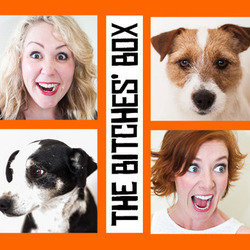 (noun) kennel used to separate a bitch on heat from other dogs to prevent knotting (breeding). Comic actresses Emma Newborn and Amelia Guild present life on a New Zealand farm through the eyes of six hilarious dogs. Meet a couple of randy terriers, hear the inner monologue of a lisping Labrador, the deranged ramblings of a pig hunting mongrel and musings of two hot bitches, locked in a box. The hilarious, unique show that had every Kiwi farmer and his dog in stitches is guaranteed to make even the toughest old gumboot (welly) laugh out loud (lol).