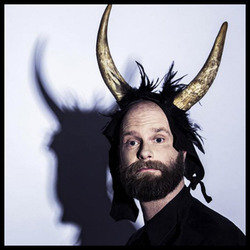 It is difficult to describe, in writing, exactly what Terry does... psychedelic performance art? Stoner music deluxe? Blue-collar observations strained through a Picasso filter and rolled onto a Gysin Canvas? Din Times 8 is at times scary, silly and almost always hallucinatory, pushing the boundaries of traditional thinking, pricking the audience's sense of reality. If Peewee Herman, Andy Kaufman and Sam Kenison had a love child then boom - Mr Clement. 'Be prepared to be shocked, in awe of him, and enthralled by his act' (TheComedyGreenRoom.com, Canada). Book early!

A cult figure in his native Canada, 2013 newcomer Terry Clement tackles comedy from a psychedelic distance, combining elements of surrealism, dada and old school humour methods. His uncompromising style pushes the boundaries of reality, taste and humour in this highly original hour of progressive comedy, which is as much a theatrical presentation as it is a stand-up show.

It is difficult to describe on a press release exactly what Terry does. Alternative? Yes. A mixture of psychedelic performance art and Blue Collar observations strained through a Picasso filter and rolled onto a Gysin Canvas? Perhaps. Din Times 8 is at times scary, silly and almost always hallucinatory, transcending traditional thinking and pricking the audience's sense of reality.

Though this is his first ever appearance at the Edinburgh Festival, Terry has performed at various festivals including the Cape Town Comedy Festival in South Africa and countless music festivals, as well as appearing on The World Stands Up (Comedy Central.) He was also nominated for the Canadian Comedy Award and a COCA Comedy Artist of the Year award.