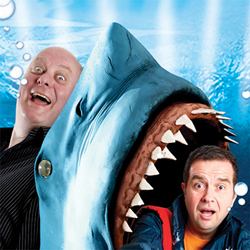 Since their successful 2011 Edinburgh Fringe debut - 'This Danny DeVito and Schwarzenegger of sorts are bringing sketch comedy back to the over 40s' (Fringe Preview) - old friends Steve Davis and David Kurk take a break from their normal lives and don the cape and mask of their Flyerman alter egos. They'll be bringing you some sketches that made them laugh when they wrote them ... hopefully you will too...