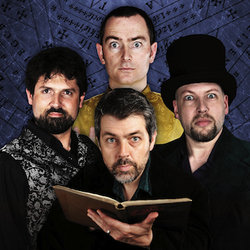 Play / improv performed on the following days in August 2013...

Shakespeare as you've never seen it before: made up on the spot! Award-winning disciples of theatre maverick Ken Campbell return. 'Uproarious, intelligent, laugh-a-minute fare' **** (Telegraph). From team behind smash-hit The Showstoppers! 'Hilarious! The Bard has never been this much fun' ***** (Three Weeks). www.theschoolofnight.com.

Last year they won the Spirit Of The Fringe Award, this year they are back in Edinburgh with The School Of Night's Spontaneous Shakespeare from 14th - 25th August.

The team behind the smash-hit improvised musical troupe The Showstoppers return with their unique literary improv show, creating a new Shakespearean play from scratch at every performance, based on audience suggestions. The troupe has honed its skills over many years, actually performing in genuine iambic pentameter and using authentic Shakespearean language and imagery.