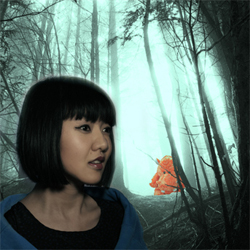 What would you risk to make your mark on the world? A girl moves to London to write her first play, a fantastical coming of age story about adventure-seeking Mei Li who enters the magical Chinese Metaforest. There, Mei meets an orange hippo and together they must battle a ferocious monster guarding a treasure that could change everything. Reality and dreamworlds collide with memory and culture as this girl in-between creates her story - and life. Peer into the gaping unknown as Mei confronts the wonderful darkness and awesome splendour of a big, big world.

Chinese Canadian journalist Anh Chu moved to England a couple of years ago and has written her first ever play, which she is proudly taking to Edinburgh this year.

Something There That's Missing is a comedy about the diaspora experience, featuring an all-Chinese, all-female cast and explores the world of "hopes and dreams" intertwined with the practical, often mundane, world of doing the actual work of realising personal ambition.

"Working" and "dreaming" form the central conflict for Joy Lo, Chu's auto-biographically inspired central character who has come to London in the hope of writing and producing a theatrical success in the UK capital. What makes the character absolutely engaging is the fact that, as a Chinese-Canadian, she is forced to negotiate her plans in the face of irreconcilable cultural and personal differences. This is realised on stage comically through her Skype conversations with her practical and materialist Chinese mother back in Canada.