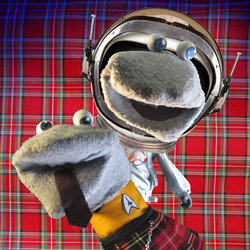 The Abbott & Costello of the sock world' (Time Out), stars of stage, screen and YouTube bring you a new show of sci-fi themed songs, sketches, socks and violence. After five sell-out years at Edinburgh and tours from Aberdeen to Adelaide (Pick of the Fringe 2012), Aberystwyth to Aarhus (it's in Denmark, they've headlined three years running), the Socks are back in outer space. 'Superbly written, crafted and performed show' **** (Punch, 2012). 'Had every single audience member ... laughing until they cried' ***** (Edinburgh Evening News). 'An absolute winner' **** (Chortle.co.uk).

The Scottish Falsetto Sock Puppet Theatre's hilarious new show is Socks In Space. Spoofing everything from Star Wars to Doctor Who via David Bowie and Vinny Jones, it's already earned 5 star reviews. A nationwide tour has taken them to Inverness and beyond and now they hit Edinburgh with their sci-fi spectacular.

As well as being stars of stage, screen and YouTube, The Scottish Falsetto Socks have a cult following as DVD "easter eggs" on Doctor Who videos. They appear on classic stories like The War Games and The Horns of Nimon, and sci fi has been the subject of some of their most popular sketches. Their YouTube videos Torchwool and Primarkeval are two of their biggest hits. Rest assured, their new show is hilarious and reduces all audiences to tears, not just geeks.