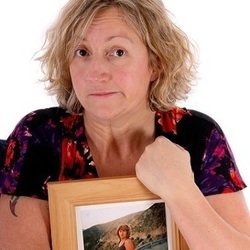 Sarah Hendrickx has always been a coward, being afraid of Dougal and her own sister. In this show, Sarah travels back in time 800 miles and 12 years into her past, on a bicycle named after Gerard Depardieu, to sort it all out in a bid to become brave and fearless. 'I only met her in the street, but she had me in stitches. Twice.' (Adam Bloom).