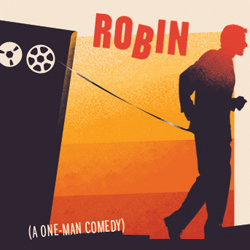 Words cannot begin to describe this thing that is funny. Robin is an exciting new one-man show in two acts. Bending sheer comic lunacy into a tautly binding structure, Robin places our hapless hero at the centre of a one-man farce in which everything goes right. Sort of. 'Had the audience in stitches' ***** (Stage). 'Original and brilliant' ***** (ThreeWeeks). 'Inspired' **** (List). 'Comic brilliance' **** (Broadway Baby.com).

Robin is the hotly-tipped Fringe debut from former Cambridge Footlight Adam Drake ('Exquisite' - Broadway Baby), co-written by Ben Rowse. Starring as the eponymous Robin, Adam Drake darts through a variety of characters, sketches and physical madcappery in an ambitious hour as tightly-structured as it is mad.

Robin is the debut hour from Adam Drake, whose last turn performing at the Edinburgh Fringe was in the Cambridge Footlights 2011 Tourshow Pretty Little Panic with performers who went on to form sketch troupe The Pin. In his role, Drake was said to have 'Had the audience in stitches' (The Stage). After the Footlights show climaxed on the West End, Drake returned to Cambridge for his final year, and co-wrote the fastest selling Footlights Pantomime of all time. At the 2012 Fringe, Drake co-wrote and directed the sell-out two-woman sketch show Beard at Assembly, picked out as one of the 'Top 5 sketch shows at the Fringe' by The List.

This is the first show co-written by Drake and Rowse, whose previous Fringe incarnations were variously described as 'Original and brilliant' (Three Weeks), 'Inspired' (The List) and 'Genius' (Whatsonstage). But for this show, the writing process has been particularly exciting.

According to Drake: "We really went for it head-first with this one, pushing the limits of comic madness in the first act, before the second act brings an order to that chaos. The show itself makes much more sense than that description, we promise". Yet for a show with such an ambitious direction, the two writers remain mysteriously tight-lipped about the exact nature of its contents. Rowse adds: "We've had to be so cautious in our publicity not to give too much away. Sometimes even we don't know what the show's about."