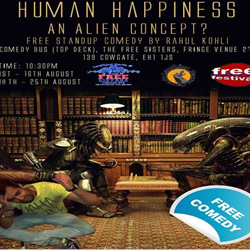 An Odyssey into the world of the oddities, hilarity, disappointments and perception of that which is life growing up and trying to find one's place as a young Geordie male in the post-modern 21st century.

With topics ranging from Geordie Shore to the use of drones in the war in terror to Buddhist Ideology, and exploring some of the most important issues of the day such as; modern Britain, race and racism, attitudes towards homosexuality, acceptance in society, politics, philosophy, religion, God, and Rahul's penis, many would say this is Tolkien on life in OUR Earth; this is Achebe on perceiving that which has fallen apart as that which remains standing, this is Rowling on Potter... if he was insecure about how little sex he was getting. This is the epic adventure, ironically staged on a stationary bus, of one man's search for enlightenment...