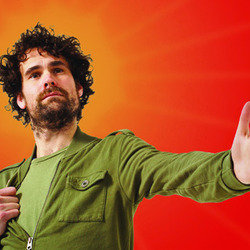 This show has been a tightly kept secret since the dawn of time. Paul F Taylor (New Act of the Year 2013) brings that show to your face! 'For a genuinely distinctive set, look no further than Paul F Taylor, who talks about everyday observations but with a wonderful edge of surrealism' (Chortle.co.uk). 'Tinges of Harry Hill ... an impressive knack for both observational wit and quirky flights of fancy' (Evening Standard). 'Beautifully crafted one-liners ... astute observational comedy' (Comedian of the Week,GQ Magazine).

Winner of the New Act Of The Year 2013 Paul F Taylor is back at the Festival, following last year's success, with The Greatest Show Ever.

Paul will also be in the sketch Comedy duo Short and Curly who is back with another mind-bending hour of interactive mayhem. Paul F Taylor and Rebecca Shorrocks - a real life couple - bring new characters, new locations and new shoes! She's short; he's got curly hair. They really are a ripe pear!