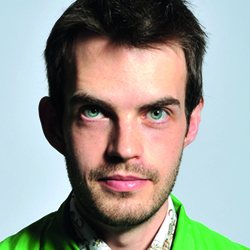 Start is the debut hour of mixed stupidity from Chortle Best Newcomer 2012 Pat Cahill. Once it starts you'll get: gags, tunes, turns and bits, pausing occasionally to breathe/fart/wink. Once it stops, you can go. 'This quirky performer has true star quality and bags of originality, mixing physical humour, gimmicks, wordplay and comedy songs. Imagine a cross between Sean Lock and Eddie Izzard and you might be getting somewhere, but nowhere close' (Bruce Dessau, Evening Standard). 'A rich stream of inventive jokes which are certainly worth seeking out' (Chortle.co.uk). 'Wonderfully weird' (Guardian).

Pat has enjoyed a rapid rise through the comedy ranks in recent years, reaching the finals of the BBC New Comedy Award and Latitude New Act of the Year competitions, and winning the Amused Moose Laugh-Off 2011. His big breakthrough came in 2012 when he secured the New Act of the Year (formerly the Hackney Empire New Act of the Year) title, following in the footsteps of comedians including Ardal O'Hanlon and Stewart Lee, as well as being named Chortle Best Newcomer 2012.

He transformed his signature musical numbers into videos for BBC Comedy Online racking up well over 100,000 hits in the process. Subsequently, his appearance on Chris Moyle's Comedy Empire (BBC Three) and Dave's One Night Stand (Dave) have seen his unique style transfer seamlessly to television, with the Evening Standard's Bruce Dessau singling him out as having "true star quality" and likening him to a bizarre concoction of Sean Lock and Eddie Izzard. He was rewarded with a nomination for Chortle Breakthrough Act 2013.