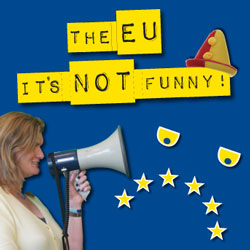 A light-hearted, satirical and poignant look at the European Union, its characters, its laws and its everyday effect on the lives of ordinary people. Never mind about 'bent bananas' there are far more unfunny things about the EU - Nigel Farage for one! A one-woman show by Nikki Sinclaire MEP from her perspective as a Member of an institution she is desperately trying to make herself redundant from. Health Warning: Lovers of the EU may seriously be offended.