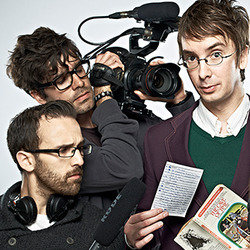 A found diary, a film crew and an incredible true story. Inspired by the Choose Your Own Adventure books of the 1980s, you determine Nathan's fate in a unique interactive experience. Every twist and turn is in your hands. With over 1500 versions and multiple endings, where will the story lead? Who can help you discover the truth behind the diary's pages? You decide. Co-commissioned by Southbank Centre and supported by Arts Council England. **** (Scotsman). 'Uniquely immersive and human experience' (Evnt.co.uk). www.ChooseYourOwnDocumentary.com

Inspired by the 'Choose Your Own Adventure' books phenomenon of the 1980's - Nathan Penlington's Choose Your Own Documentary tells the true story of the discovery of a found diary and his attempts to unravel it's many mysteries. Part stand-up, part film documentary and part spoken-word, it's a unique and compelling interactive experience in which the audience play the most important role.

With over 1500 possible versions and multiple endings, every performance is different. At each twist and turn it's the audience who dictate which paths the documentary takes - whether Nathan meets with success, failure or the unexpected, depends on the choices audience members make via remote controls. Where will the story lead? How will the story end? You decide.

Eighteen months in the making the search spans four continents and documents the adventures Nathan has with the many people he meets along the way - including a self-help guru, a sword swallower, a graphologist and some ghosts from his past...

Choose Your Own Documentary has been commissioned by Arts Council England and Southbank Centre. The show previewed at SXSW in Austin, Texas in 2013 supported by ITV new and Hackney House.