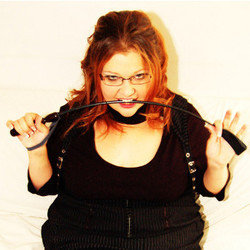 Fat girls have all the fun! And none more so than Miranda Kane, who became Melody - a £2000 a night escort, and weighed over 300lbs to boot. In this tell-all comedy, she exposes the truth about sex workers, their clients, and the hilarious, heart-warming and often bizarre moments in a unique career. It's an eye-opening look at a fascinating industry with hilarious anecdotes and a no-holes barred (no pun intended) Q&A. Even if it's not your first time with a prostitute, it'll be the funniest!

The Coin Operated Girl tells the true story of Miranda's previous career as a £2000 a night escort who weighed over 300lbs (25 stone) at the height of her success.

In this tell-all comedy, she exposes the truth about sex workers, their clients and shares heart-warming and often bizarre moments in her fascinating career.

This show was a sell-out at the Brighton Fringe Festival and is a no-holes barred (no pun intended) comedy performance with anecdotal stories and a Q&A session. Miranda aims to give audiences the opportunity to think about their preconceptions of sex workers and plenty of big laughs. Coin-Operated Girl offers a witty new angle on the world of sex-work.

Miranda Kane was a sex-worker for 7 years. She is now a loud, proud stand-up comedian and advocate for Sex Worker rights. Since her change of career she has reached the 2012 'So You Think You're Funny?' semi-finals and is on the Funny Women One To Watch list.