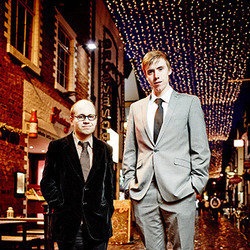 Paul McDaniel and David Callaghan are two of the most exciting talents emerging from the Scottish comedy circuit. Both have over two years experience and David appeared in the BBC New Comedy Awards 2012, was a finalist in Tyne and Wear New Act of the Year 2012 and a semi-finalist of the Laughing Horse New Act of the Year 2013. Join them for an hour of stand-up comedy in the early evening on the Cowgate.