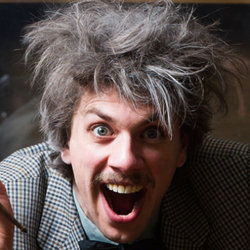 Join Albert, the genius behind the über-coolest moustache in science, for a sehr entertaining hour of songs, silliness and the wurst sausage joke ever. Albert's back to prove Einstein = Musical Comedy Squared! A wunderbar new show from the boys behind Edinburgh Fringe smash hits Crunch! (Total Theatre Award Nominee) and The Origin of Species... (Best Show / Best Performer Nominee - Adelaide Fringe 2012) 'Remarkably inventive, thoroughly entertaining ... science has rarely been so fascinating and never so much fun' (Stage). 'John Hinton ... would get anyone interested in science' (TheatreGuide.com.au).

Ever looked at E=MC2 and thought... what's that all about then? Ever been curious how a pacifist became the creative mind behind the atomic bomb? Ever wanted to meet the genius behind the über-coolest moustache in scientific history? Yes? No? Either way, your time has come!

Join Albert for an hour of science, silliness and the wurst sausage joke ever as he (theoretically) proves that Einstein = Musical Comedy Squared in this wunderbar show new show from the boys behind international smash hits Crunch! and The Origin of Species...

Combining comedy songs and gloriously bad puns alongside fun explanations of the science behind his landmark theories and some rather surprising revelations into the great man's personal life, this is a show for anyone who wants to go on a hilarious and thought-provoking journey into the mind-bending scientific mysteries of the modern world.

Frantically fast-paced and wonderfully warm-hearted, discover acclaimed actor John Hinton in this celebration of the ideas, ideals and idiosyncrasies of the man whose theories sparked a revolution in modern science.