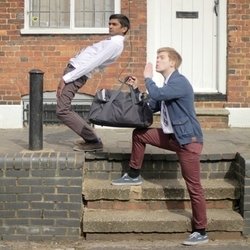 With a love for well-written jokes, a penchant for larger-than-life characters and a predilection for improvisation, In Cahoots take their audiences to whole new worlds; like that of the simple caveman struggling to get to grips with 'modern life', of the mysterious fortune-teller and her gullible client, and of the beautifully mismatched romance betwixt the perfect 1940's gentleman and a modern Essex girl.

The show is written and performed by Luke Manning and Paul Raymond, two versatile comic actors who have been improvising together for over four years and have worked closely together on numerous other projects, such as the short film Ewan Daddy Chiles, directed by Paul and starring Luke in the titular role. Since forming In Cahoots in January 2013 they have reached the semi-finals of the Golden Jester Comedy Awards (to be held in September 2013) and released a YouTube sketch, What Conversations Really Mean, which featured on the Chortle website. Previews of their Edinburgh debut received five-star reviews from What's Peen Seen and The Public Reviews.

Luke and Paul also perform as one half of London-based improvised comedy group Shoot From The Hip! As 'Shoot From The Hip!' they have had a weekly residency at Covent Garden's Top Secret Comedy Club since November 2011, and are the resident improvisation group at all Monologue Slam UK events for 2013, performing regularly at Theatre Royal Stratford East. Additionally, Shoot From The Hip! have performed at events including Christ College Cambridge's May Ball, The Oxjam Charity Festival, and ImproFest 2012, picking up recommendations from The Metro and Londonist along the way, as well as a five-star review for their weekly show from The Public Reviews.