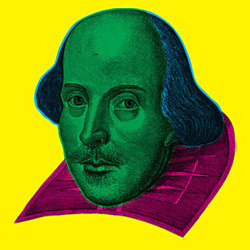 An entirely new and unique Shakespeare play is made up on the spot using the audience's suggestions. Bursting with comedy, love, poetry, tragedy, power struggles, the supernatural, mistaken identity and everything you'd expect from a Shakespearean play. Join some of the most exciting improvisers on the circuit for 60 minutes of riotous fun. Impromptu Shakespeare have their tongues firmly in their cheeks and their feet planted in the works of The Bard. Whether your knowledge of the Complete Works is 37 plays or none, this is the show for you. www.impromptushakespeare.com

Bursting with love, poetry, comedy, tragedy, soliloquies, power struggles, mistaken identity and the supernatural, Impromptu Shakespeare creates an entirely new and unique play, in the style of the world's pre-eminent dramatist and based entirely on audience suggestions.

Join some of the most exciting improvisers on the circuit for 60 minutes of riotous fun in an ingenious family friendly show (12+) that will delight Shakespeare aficionados and rookies alike. The Impromptu Shakespeare team have their tongues firmly in their cheeks and their feet planted in the works of The Bard.

Rob Wilson trained as an actor at Guildhall where he studied Shakespearean acting under Patsy Rodenburg . He has performed in many Shakespeare productions in the UK and abroad and worked with companies including Punchdrunk, The Old Vic Tunnels and The Globe. Rediscovering stage based improvisation; Rob cut his stage impro teeth training in Chicago with Second City and IO and spent a year with the award winning Maydays in Brighton before feeling the call to start the Impromptu Shakespeare Company. Rob is also the founder of Lost & Found, an events based interactive theatrics outfit.

Jules Munns also trained at the Guildhall School, where he learnt improvisation with Ken Rae. After graduating, he was founder member of the Improsarios. For the last three years, he has been one of the artistic directors of The Nursery Festival and The Slapdash Festival of improvisation. He performs with the Maydays, Music Box, and his own company, The Guild of Angels.