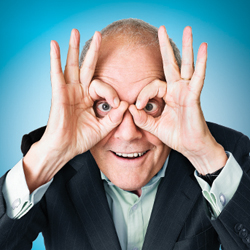 Just A Minute/One Show regular Gyles won multiple five stars for his last Edinburgh outing. 'Joy, deep joy' said The Scotsman. This time, with more hilarious stories from his life in theatre and politics, plus a little help from psychiatrist Anthony Clare, Freud, Frank Sinatra, Frankie Howerd and the Queen, award-winning raconteur and ex MP Gyles explores the secrets of How to Be Happy. This show should make you laugh (now and again) and could change your life (for ever). Book now. His last show was a sell-out. 'Incredibly funny, wildly indiscreet' (Daily Mail).

When Gyles Brandreth set out Looking For Happiness, he started in Las Vegas and ended up in the psychiatrist's chair - with Dr Anthony Clare. What the great man taught him - plus lessons Gyles learnt from his time as an MP and Government Whip, and from unforgettable encounters with Margaret Thatcher, Frankie Howerd and Frank Sinatra - to say nothing of Prince William, Elton John and Sheikh Mohammed - is the essence of this unexpected 60 minutes of hilarious stories and practical advice.