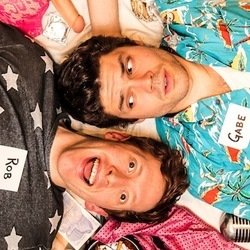 Depraved comedy duo for every bad decision you've ever made. Wild sketch comedy with pumping music, dance numbers and rapping transvestites. Guilt & Shame will take you on a journey of sin, redemption then right back to sin again. Following sell-out shows in 2012 at the Underbelly and London's Soho Theatre as well as playing Latitude and Bestival, Guilt & Shame are back with a show so good that once will never be enough. 'One of the best sketch shows of 2012' ***** (TheNewCurrent.jux.com). **** (SGFringe.com). **** (Fringebiscuit.co.uk).