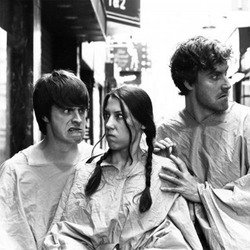 The Grandees present The Wrong Side of the Door, three short plays taking the imagination on a roller coaster adventure of bizarre and wonderful character comedy. Conker ferrets a-ferreting, lizards a-leaping and a little Wula a-running! Enjoy the wild and stupendous ride! 'Perfectly executed comedy' ***** (Edinburgh Evening News). The Grandees are a magical and dynamic comedy trio made up of Tom Turner, Marny Godden and Andrew Mudie.

It's been three long years since the critically acclaimed Grandees appeared at Edinburgh Fringe with their unique, charming and wonderfully madcap sketch comedy. Enjoying cult success with The Box of Cricks, The Grandee Way and the eponymously titled The Grandees, they were praised by audiences and critics alike for their originality, energy and the freshness of comedic talent they brought to the scene.

And now they're back.

This year Marny Godden, Tom Turner and Andrew Mudie present The Wrong Side of the Door, a frenzied parade of bizarre and compelling characters that present three short and surreal stories in the trio's trademark clowning physicality. Punchy storylines carry them from one devious plot-twist to the next in this delightfully bonkers escapade.

In the middle of the woods Conker Ferrets snuffle for conks for hundreds of years, longing for the day when they save enough tokens to retire and build a castle out of shit. A universe away, the Little Wula slogs away for his master, never suspecting the dastardly plotting of the Lizard that lives in the drain, and back in our very own land, Peter Pan and Michael Bolton-Greenfly come face to face with an exceptionally hirsute Mr Werewolf-Head, the local singing tutor who is desperate to hide the dark secret of his daughter Mary.

In a heady mix of comedy, drama, and seemingly hidden dance talents, these exceptional performers give you a glimpse into the bizarre and twisted minds of The Grandees.