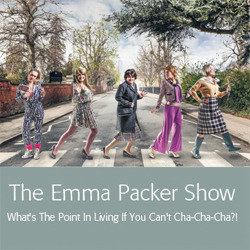 One actor, eight characters, 60 minutes! This fast-paced comedy show takes you through a collage of crazy characters. From Essex's Beverley, "what's the point in living if you can't cha-cha-cha?" and Australia's Susannah Cavanaugh, "Tupperware is not just for Christmas, it's for life!", to Amy Jones who loves politics, rapping and older men, "Dr Fayad, his short back and sides drove me mad!", and Alice the librarian, "the difference between a friend and an acquaintance is, a friend will help you move a body!". Plus more!

Ladies and Gentleman! And children over twelve! Emma Packer is now ready to introduce you to her ménage of kooky characters in the World Premiere of this exciting new comedy show. 1 Actor. 8 Characters. 60 minutes. From Susannah Cavanaugh, the Australian TV personality and pioneer of the campaign "Tupperware is not just for Christmas, It's for Life!" to Amy Jones, the politically-minded rapping rude girl with a penchant for older men ("Sir Bruce Forsyth, You are da luv of my life"!), The Emma Packer Show brings to life eight weird and wonderful creations in 60 minutes of non-stop tomfoolery. Combining live performance with pre-recorded video sequences, characters are able to interact with each other in a show that is as unique as it is hilarious.

Emma Packer trained at LAMDA and has always had a passion for character acting and improvisation. Over three years, through open mic and sketch nights at various venues in London and showcases at the Leicester Square Theatre and Tristan Bates Theatre, Emma has created the eight characters that can now be seen in The Emma Packer Show. Emma is also the co-host of the Fits And Giggles comedy night at the Royal Vauxhall Tavern where she can be seen performing these characters on the first Wednesday of every month.