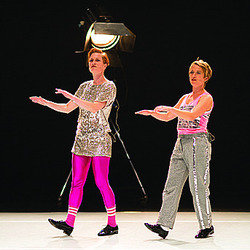 Dance performed on the following days in August 2013...

Duet investigates the two P's: pairs and power. Being on the verge of a breakup, Hanna and Heidi have decided to take up couple therapy. After 13 years together the two choreographers take a brutally honest look at themselves revealing a confused and disillusioned relationship. The constant quest for power and admiration has taken its toll. Will they still be together after the Fringe? Duet is a humorous and provocative investigation into life as a twosome: '...naturally funny and at moments their delivery is downright hilarious' (Londondance.com). Duet has been shortlisted for The Place Prize 2013.