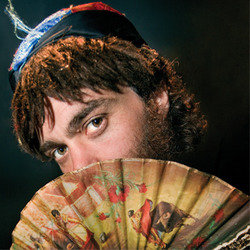 8 different start times (8 shows back to back).

Eight shows back-to-back, starting the day from scratch, each show will be built from the best of the previous, taking shape through the day to form a completed eighth show. 'For those jaded by the pedestrian bilge that litters the comedy landscape, Doctor Brown is good for what ails you.' ***** (Fest). See all eight shows for £40. Call 0844 545 8252 or visit Underbelly box office to purchase full day tickets. Box office is located in Bristo Square or Cowgate.

Doctor Brown's new show, Bexperiments, will be created over seven eight hour-long shows throughout the course of one day, with each show taking the best of the last and culminating in a completed eighth show. Audiences can attend as many of the shows as they like or make a day of it and see all eight.

Doctor Brown is the stage persona of award winning US comedian and mime artist Philip Burgers. For his 2010 show, Because, he was awarded The Sunday Times Best Newcomer 2010, Top Ten Pick of the Fringe 2010 and nominated for the Malcolm Hardee Award for Most Original Comedy 2010; a title for which he was also nominated for Becaves in 2011.