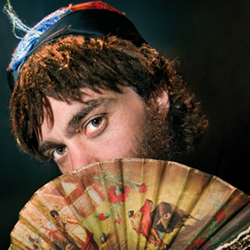 Foster's Edinburgh Comedy Award, Melbourne International Comedy Festival Barry Award and Total Theatre Award winner Doctor Brown is back for one week with the Doctor Brown trilogy - 2010's Because, 2011's Becaves and 2012's Befrdfgth. 'The strangest, funniest, most exciting hour I've spent at the Fringe so far... stunning' **** (Times, on Befrdfgth). 'His combination of clowning, oddity and low-level menace constitute one of the funniest shows on the fringe' **** (Guardian, on Becaves). 'An utterly bizarre, dreadfully funny hour of uncompromising anti-comedy' **** (Time Out, on Because). www.underbelly.co.uk for performance information.

Doctor Brown is the stage persona of award winning US comedian and mime artist Philip Burgers. For his 2010 show, Because, he was awarded The Sunday Times Best Newcomer 2010, Top Ten Pick of the Fringe 2010 and nominated for the Malcolm Hardee Award for Most Original Comedy 2010; a title for which he was also nominated for Becaves in 2011.