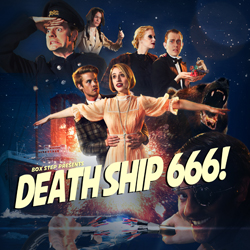 Start your morning with a bang, with Death Ship 666! The fun disaster movie parody play, following the ill-fated passengers aboard a half-built cruise ship's maiden voyage to the Bermuda triangle. Where anything that can go wrong, does go wrong ... and explodes on Death Ship 666! Fans of Airplane! Naked Gun and Titanic extremely welcome!

Death Ship 666 is a just another half-built ship. Or is it? As our heroine Grandma boards this ill-fated vessel on its maiden voyage to the Bermuda Triangle, she falls in love with the ships architect. Perhaps this is her chance to finally fulfil her namesake and have a child (so that they can have a child). What poor Grandma doesn't know if that on Death Ship 666 anything that can go wrong does go wrong... and explodes!

Written by The Clarkson Twins and Gemma Hurley, directed by Michael Clarkson, Edinburgh's only Titanic parody is Airplane meets Naked Gun. The show is created by the talented Box Step productions who are committed to creating absurd and joyful comedy. They have won awards for a number of their films, including Best Skeptic Film 2012 for their film Skepticism. They were also finalists for the Film 4 Scene Stealer award for their short First Day inspired by David Nicholls' One Day.

Box Step have become a YouTube sensation, amassing a cult-creating 250,000 hits for their videos. Their Fellowship of The Ringwraiths video currently has nearly 95,000 hits alone, and prompted Mark Ordesky to send it to the Lord of The Rings Team. Having got everyone talking about them from film distributors eOne to author David Nicholls they are now making their Edinburgh Fringe Debut.

Death Ship 666 promises to be a slick and hilarious hour of Titanic parody from the young company who have already honed their craft and who are ready to take Edinburgh by storm - If you thought Fellowship of the Ringwraiths was funny, you have only seen the tip of the iceberg...