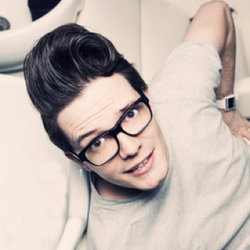 The 'hilarious' (heatworld.com) David Morgan wishes he was pretty. Two ridiculous events conspired to make him face up to how he looked, what that meant to him and why it has mattered so much. Help him discover what makes you feel pretty without having to buy all the make-up MAC can make. 'A joy to behold' (Metro). 'David Morgan is Funny, that's right, capital F attitude' (Amused Moose Laughter Awards, Top 10 show 2011). **** (one4review.wordpress.com). **** (Metro). **** (Edinburghisfunny.com).

Britain's brightest new talent, David Morgan, is set to return to The Edinburgh Festival Fringe with a fresh stand-up show Pretty at The Underbelly from 31st July - 25th August.

In this hilarious new tale, David wishes he were pretty. After attending two ridiculous events that conspired to make him face up to how he looked, what that meant to him and why it has mattered so much. With his elaborate quiff and boyish charm, help him discover what makes you feel beautiful without having to buy all the make up MAC can make.

His debut hour show Triple Threat premiered at Dave's Leicester Comedy Festival where it earned a nomination for 'Best New Show' and then was in the final shortlist for the 'Amused Moose Laughter Award' up at the Edinburgh Festival Fringe in 2011.

An avid television enthusiast, David's love of the small screen led to him writing for HeatWorld and creating a popular rundown of The Eurovision Song Contest that was even included in the BBC's Online Coverage. He is also a regular panelist on Big Brother's Bit on the Side (Channel 5) and Geordie Shore's: Mint Bits (MTV).