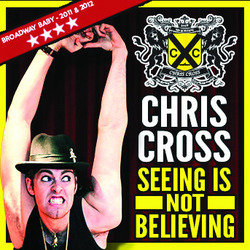 Magic performed on the following days in August 2013...

A late night comedy magic show with a twist from the Fringe's favourite showman! Chris Cross returns for his eighth Festival Fringe with his unique comedic blend of off-the-wall magic, contortion and escapology. Cross has travelled worldwide with his show and he's even performed for the British monarchy! Expect some new tricks and old favourites too - it's free but not shit! A 'must-see show' (Stage), 'Cool and funky act' (Simon Cowell), **** (BroadwayBaby.com 2011, 2012).