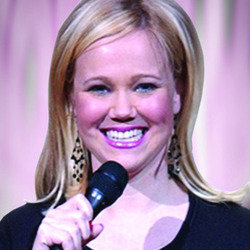 Caroline Rhea, stand-up comedian and actress brings her fresh, funny and spontaneous show to Edinburgh. You know her from Curb Your Enthusiasm. She was Aunt Hilda in Sabrina the Teenage Witch and the host of NBC's The Biggest Loser. Her films include Man in the Moon, The Perfect Man and Christmas with the Kranks. Unpredictable, witty and very smart!

Though she may be best known by many as Aunt Hilda on Sabrina the Teenage Witch, Caroline Rhea is one of the most accomplished comedians and comedy actresses of her generation. Her last run at the Fringe in 2010 won her great reviews, as well as a growing British fan-base, and she returns this year with another fresh and spontaneous hour of stand-up.

Having ventured from Canada to New York to study stand-up, Caroline soon featured on MTV's Half-Hour Comedy Hour, Comic Strip Live (Fox) and Caroline's Comedy Hour (A&E). LA soon beckoned and NBC offered her the leading role in their sitcom Pride and Joy. But her fame came with Sabrina and the Teenage Witch (ABC & WB) and countless offers soon flooded in, amongst them replacing Rosie O'Donnell and hosting her own talk show, The Caroline Rhea Show (CBS), regularly starring in Hollywood Squares (CBS), and becoming the original host of The Biggest Loser (NBC).

Hollywood soon took notice and her movie credits include The Perfect Man (opposite Heather Locklear), Man on the Moon (with Jim Carey) and Christmas With The Kranks (alongside Tim Allen and Jamie Lee Curtis). She has also appeared in comedy classic Curb Your Enthusiasm and provides several voices on the Disney Channel.