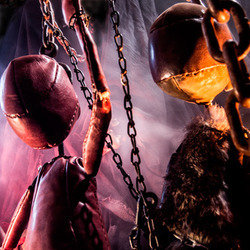 'Flawless' ***** (Fest). 'Triumphant' ***** (ThreeWeeks). Puppetry's Balkan bad-boys return with the sequel to end all sequels! Become enthralled as these two tatterdemalion rogues recount their tribulations in the underworld. Marvel at their daring, gasp as they burlesque and improvise their way through this epic tale of companionship and separation, weep as they struggle with their inner daemons and celebrate as they triumph over adversity. One hour continuous flow of amusement with a dark and twisted heart. Once again expect riotous exploits, malarkey, molestation and mirth of a magnitude hitherto unseen (since last year)!