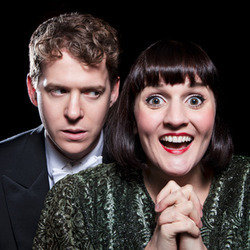 The musical missionaries are coming. Armed with catchy tunes and biting satire, House of Blakewell is out to convert Edinburgh this August. Alice wants to spread joy through song and dance. Harry wants more pious proceedings. Enlightenment? Maybe. Entertainment? Guaranteed. This award-winning duo has to be seen to be believed. 'Frighteningly tonsilled' (Time Out) and outrageously topical, with 'catchy rhymes and punchy one-liners like a musical David Mitchell' (Islington Gazette), it's hard not to #LoveBlakewell. Winner Craig Barbour Award for Songwriting, Soho Theatre. www.houseofblakewell.com

Composer/song-writer Harry Blake and performer Alice Keedwell are House Of Blakewell, and they're heading to Edinburgh this August. Having won the Craig Barbour Award for Song-Writing (Soho Theatre), loyal London followers and critical acclaim, they're now on a mission to win the hearts and minds of Edinburgh with their first full musical comedy. Book Of Blakewell combines the best of House Of Blakewell's award-winning songs with new material created in collaboration with Dancing Brick's Thomas Eccleshare and Valentina Ceschi. Featuring original show tunes, character comedy songs, rap, tap and a top E, Book Of Blakewell boasts a refreshingly modern blend of traditional theatre styles and tells a touching story of friendship with a healthy dose of satire.

The musical missionaries are coming. Armed with catchy tunes and biting satire, Harry and Alice share a dream: to change lives through musical comedy. Together, the duo will expose the hypocrisy of liberals, the titillation of the tabloid press and a whole host of modern ills. Unexpected events and crises of faith may test their mission and partnership, but music and friendship must win out.

House Of Blakewell unites the talents of Harry Blake (composer/song-writer, whose first opera Manga Sister was Time Out Critics' Choice and Pick of 2011, and whose theatre credits include Don Giovanni, Soho Theatre, PERLE, Edinburgh Fringe 2012 and Tour) and Alice Keedwell (actor, musician and singer, whose work includes Soho Theatre, Upstairs at the Gatehouse, Opera Up Close and the Lord Chamberlain's Men). In less than a year, they have won the Craig Barbour Award for Song-Writing at the Soho Theatre, reached the quarter-finals of the Musical Comedy Awards, and enjoyed two successful short runs at the King's Head Theatre.

For Book Of Blakewell they are joined by Thomas Eccleshare (winner of the Verity Bargate Award for Pastoral, Soho Theatre & HighTide) as dramaturg, and Valentina Ceschi as associate director. Thomas and Valentina are co-founders of Dancing Brick - a two-time Total Theatre Award nominee and winner of Arches Brick Award and Guardian's Best of the Fringe. Choreography is by Jennifer Fletcher (The Mostly Everything People)