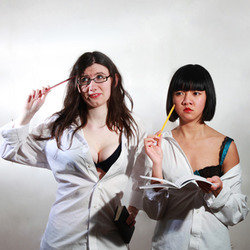 Come see the sex talk your parents definitely didn't want to have with you. A fun-filled romp through the science of sex! Can a man really distance ejaculate? How does a male hedgehog mount his mate without getting a little prick ... (pun maybe intended)... Will there be better orgasms at the end of our measuring tape? Would you 'do it' for science? Come peek into our bedrooms and satisfy your hankerings at Bonk! the show inspired by Bonk: The Curious Coupling of Sex and Science by best-selling author Mary Roach.

Science and sex take centre stage in Bonk!: the sci-fact-romp-com play that explores sex from various positions and takes the Edinburgh Fringe firmly by the balls and beakers!

Inspired by the New York Times' bestselling novel Bonk: the curious coupling of Science and Sex, Bonk! is a titillating look at the biology, chemistry and physics of sex via the enthralling and often bizarre microcosm of sex research scientist Cat, and her disgruntled husband Sam.

"The scenarios in the book are inherently theatrical and hilarious,"says Bonk! producer Isobel Marmion who approached the author Mary Roach about adapting Bonk for the stage. After Roach's enthusiastic response, Marmion created Crowtown Theatre Company. "Sexpertise starts with education. Performance, especially comedy, makes it fun and accessible." Although Marmion herself is celibate, she was struck by the space sex occupies from a universal and historical standpoint.

"Sex causes so much havoc," she says. "The having, the not having; the having but not having the sort you want - in everyone's lives - when in actuality, it's all about science!"