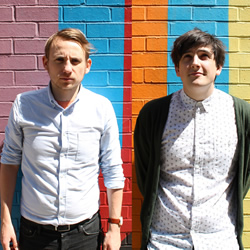 Welcome to a show full of danger. If by show you mean room where two young men take turns talking at you, and by danger you mean anecdotes and stories that share moments of embarrassment, faux pas and mild trauma.

Jack De'Ath of LaughOutLondon.co.uk offers up an ooze of likeable self-deprecation with a mixture of left-field observations, awkward memories, before raising everyone's spirits with a variety of upbeat games that will have comedy go-ers leaping out their seats (in a good way).

The Bob in 'Bob & Jack' is Bob Fletcher is writer and comedy producer for shows featuring Robert Webb, Miranda Hart and Jack Whitehall (well, like, one joke). Striding gingerly into manhood, Bob questions what masculinity is, sharing some intimate tales of horror about his mum, giving blood, being a former fatty and getting mugged to smithereens. But it all has a happy ending, or does it? No, it does. Does it? Maybe (yes). Embrace the danger!