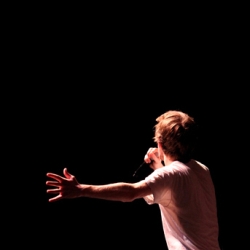 Following the 2010 total sell-out; Words, Words, Words, comedy sensation Bo Burnham is back for a strictly limited run with his brand new show What. The recipient of the Edinburgh Panel Prize, a Malcolm Hardee Award and unprecedented rave reviews, Bo's YouTube videos have been watched by millions of worldwide fans. This year he created his first comedy series - Zach Stone is Gonna be Famous - for MTV. 'Find yourself punchdrunk on it's brilliance' ***** (Guardian). 'Enduring words and images you'll want to treasure' ***** (Independent). 'Fierce intelligence and originality' ***** (Time Out). 'Exquisite' ***** (Chortle.co.uk).

Bo Burnham returns to the Fringe with his signature combination of sophisticated wit, expert showmanship and breath-taking musical ability.

A few years ago, not many people in the UK had heard of Bo Burnham.
But the Edinburgh Festival changed all that, bringing Bo a plethora of five star reviews and stupendous critical acclaim. He received the "Spirit of the Fringe" Award and was the youngest performer to ever be nominated for the main Edinburgh Comedy Award in the Festival's 30-year history.

A few years before that, Bo Burnham was just another high-schooler recording YouTube videos for fun. Today he has three full-length LPs, a Comedy Central special alongside film credits with roles in Apatow's Funny People, and Federighi's coming-of-age comedy Sin Bin.

Bo comes to the Fringe fresh from the set of his MTV series in which he stars, writes and produces. Zach Stone Is Gonna Be Famous tells the story of a kid just out of high school who's pursuing the ultimate American dream - of being a celebrity without having any talent.

Not a problem Bo suffers from himself.