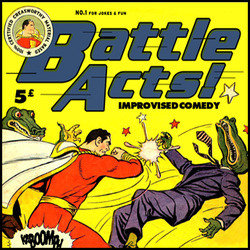 BattleActs! is a multi five-star, Time Out, Critic's Choice, and Smirnoff Hot Pick improv comedy show, winning the Manchester Improv Tournament and Pick of the Fringe (StageWon.co.uk). Free Fringe stalwarts over the last four years and proud to have garnered a loyal following of improv fans as well as critical acclaim. BattleActs! have been regulars on the UK Improv scene since 2009. Who will be victorious? Who will fall? This is no joke. Comedy just got nasty. ***** (StageWon.co.uk, EdFringeReview.com, Edinburgh Festivals Magazine)

Following on from an acclaimed Edinburgh run in 2012, the intrepid BattleActs performers return to the Edinburgh Fringe, and once again - they're free! Recommended by The Independent (Top Ten Comedy Shows), Timeout (Critic's Choice) and a Smirnoff Hot Pick, this hilarious, no-holds-barred improv smackdown is not to be missed.

BattleActs! have been regulars on the London impro scene since 2009, with residencies at the Canal Café and The Dogstar, Brixton, as well as guest appearances at The Roundhouse in Camden, The Comedy Store in Manchester and the Brighton Fringe. Having learnt the ropes from the late, great Ken Campbell and David Shore (Second City, Improv Olympic), the talented troupe have enjoyed a run of success, recently resulting in their being crowned this year's Manchester Improv Tournament Winners.

An Edinburgh regular and Fringe favourite, BattleActs! toy with the concept of improvised comedy through a trademark competitive streak as the company are split into two teams and forced to fight it out against one another in a test of wit, speed, and acrobatic versatility. No two shows are the same, with forfeits and themed nights, such as Battle of the Sexes, Royal Rumble and The Pain Edition to keep everyone on their toes!

Who will be victorious? Who will fall? This is no joke. Comedy just got nasty.