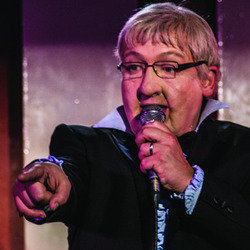 Barry from Watford, the nation's favourite octogenarian brings his brand new, fast paced hilarious all stand-up show, Shooting From The (New) Hip to the Edinburgh Festival this year from the 12th to the 25th of August at The Pleasance Courtyard.

Shooting From The (New) Hip will see 82 year-old Barry at his very best with fierce one-liners, biting satire plus a bit of blue for the youngsters.

With time running out, Barry wants to make it in showbiz before it's too late. In many ways it's a 'midlife crisis'...that's assuming he lives to be 164, which knowing this old bugger, he probably will.

Of course, making a success of himself in the fickle world of showbiz is just one of his several 'bucket list' goals and Barry talks us through them all.

Along the way he shows us the view of the world from an 82 year-old man. He's the voice of experience in the ASBO era and he isn't afraid to sound off about it. But woe betide anyone who thinks this is a lament for the "olden days" - Barry is bang up to date. He isn't ready to bow out yet, thank you very much indeed. Oh, no no no.

Barry from Watford is thrilled to be performing his first all-stand up show for Edinburgh he says: "I am delighted to be going up to the Edinburgh Festival. I'm glad to be coming to The Pleasance... in fact, to be honest, I'm just glad to still be here."