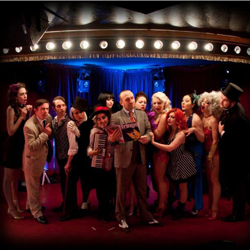 The sell-out London smash hit show that mixes the best new variety acts, archive footage, one-time-only moments and an on-stage interview, comes to Edinburgh! Hosted by award-winning vaudevillian Mat Ricardo and starring some of the most important names in the world of entertainment. Previous guests include Graham Linehan, Frisky and Mannish, Howard Read, The Boy with Tape on His Face, Lenny Beige and more. Every show will be different - with a new interview subject every night, expect big names, surprises, jaw-dropping acts, and some of the most exciting performers of the Fringe on stage and in conversation!

Listen to the Podcast