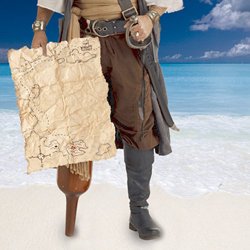 Join honest Jim Hawkins as he sets sail on a frantically funny high seas adventure. Outsmarting Long John Silver in search of Captain Flint's buried treasure, Jim finds himself on a desert island with some cheesy characters and one particularly pongy parrot - with barrels of laughter and lots of joining-in for the whole family to enjoy! International touring Theatre Company Uncontained Arts return to the fringe for their third year and are in their fourth successful year as company-in-residence at Derby Theatre. Past children's productions include Alice in Wonderland (2010) and Not So Grimm Fairy Tales (2011).