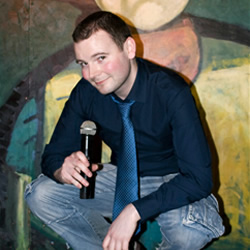 THIS SHOW WAS CANCELLED.

Comedian Teddy brings his free standup show to The Scottish Comedy Festival at The Beehive Inn.

He's written for BBC1, Channel 4, BBC Radio Scotland, & BBC Radio Five shows, been twice runner-up in Scottish Comedian of the Year (2008 & 2009) and was named Best Up and Coming Comedian at the Scottish Variety Awards 2010.

Teddy is also the founder of ScottishComedyFC.com and the Scottish Comedy FC podcast.

With an act blending one-liners, topical gags, and real-life tales, quotes for him include: