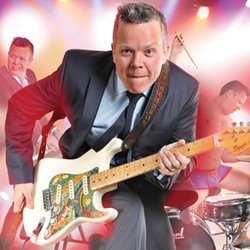 There have been other Rob Deering shows, but this is The One. The award-winning comedian, multi-instrumentalist and consummate showman - 'As sharp and versatile as a Swiss Army knife' (Independent) - returns, a one-man super group in a live-music stand-up comedy event about the quintessential everything. The ultimate show, the ultimate night out, the ultimate high - it's the Best Rob Deering Album In The World... Ever. 'A massively engaging intelligent comic offering a cracking mix of songs and silliness' (Guardian). 'An evening in his company is nothing less than a joy' (Independent on Sunday).

There have been other Rob Deering shows, but this is The One - Rob Deering returns to Edinburgh's Pleasance Courtyard for the whole month of August with his biggest, rockingest show yet'?

Deering turns 40 this year, but he's not the kind of man - or the kind of comedian - to dwell on it. Instead, he's been using his mid-life-crisis power for good, training his former chubby self up to buffery and collecting some fabulous, musical toys. Yes, he's grown up. But not too much. The One as a title hints at is not just a solo musical extravaganza. The One is about the ultimate. The ultimate high, the ultimate anthem, the ultimate night out in Edinburgh - the ultimate Rob Deering show. The One is all original self-penned material - the first full album of tracks from the composer who brought us the Angry Gardener songs, the insight of Drinking/Religion and the classic Who's Gay?

Rob's always been a hit in Edinburgh since he made his festival debut in the famous Comedy Zone in 2001. The One is his eighth full length show, and it really is the biggest and the best; never becoming the pop-or-rock star he imagined he'd be as a teenager has always advised Deering's work, but only now has he truly embraced his destiny and become the band he always wanted to be. Not a one-man band in the mouth-organ-on-a-stick, cymbals-between-the-knees sense, so much as a one man U2, The Who or, heaven forbid, Maroon 5.

Anyone who has seen his late night game show Beat This' (Pleasance Courtyard Upstairs 11pm Fridays & Saturdays) will know that his way with an instrument is only matched by his way with an audience; Rob Deering - The One is an enormous, exciting, hilarious, musical hug of a show that will send you off grinning uncontrollably into the night.