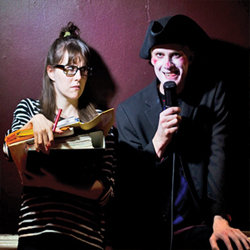 A controversial comedian, a social worker, an injured baby... Punch is a very dark comedy about comedy. Echoes of Russell Brand, Frankie Boyle, Lenny Bruce and a centuries-old tradition of offense abound in this bizarre, taut and wickedly funny two-hander. Reality comes with a thud for one outrageous stand-up when he is quizzed by social services over the condition of his baby daughter and the content of his latest show. Expect dark jokes, fast dialogue and some surprising revelations! A new play by award-winning writer Steven Bloomer featuring Frisky and Mannish's Matthew Jones and actress Kirsty Mann.

Punch is a very dark comedy about comedy. Outrageous stand-up John is quizzed by social services over the condition of his baby daughter and the content of his latest show; where does the line between the act and reality lie? Expect dark jokes, fast dialogue and some surprising revelations. Punch stars Matthew Jones and Kirsty Mann and is directed by Jessica Edwards.

Punch is written by Steven Bloomer whose previous plays include Boiling Frogs by The Factory at Southwark Playhouse 2010, Bugs at the Wilderness Festival 2011 and First They Slaughtered the Angels at Guildford School of Acting, 2008. Steven's short-plays and rehearsed readings have been performed at a number of leading theatres and theatre companies including, The National Theatre Studio, Paines Plough, The Globe, Soho Theatre, Trafalgar Studios and Hampstead Theatre. Steven is part of the Royal Court Studio Group and won the Adrienne Benham award from Theatre Centre in 2009.

Originally aired in a one-off staged reading at the Old Vic, this production of Punch, appropriately, occurs 350 years after the first Punch and Judy show was seen in Covent Garden. Those beloved puppets have endured centuries of changing trends by keeping to a simple rule - what's funny is funny. That may include domestic abuse and murder. In Punch, Steven Bloomer introduces a stand-up comedian who, like Punch himself, sees no boundaries. He entertains some, offends others. In an age of Ofcom complaints, is he to be championed or censored?