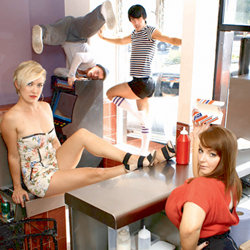 Dance performed on the following days in August 2012...

Leonie is waiting for Paula, Paula is waiting for a man, Bryan is waiting to be included. We're all waiting for something, mostly for something to happen. So if you have a love for good dancing, good looks and a good time, you've come to the right place, because these guys know how to fill the time better than most. Adelaide Fringe 2012, Best Dance Show. Produced and originally presented by Absolut Fringe. An Absolut commission.