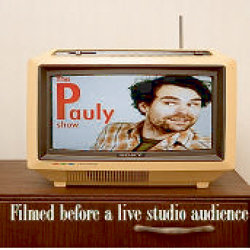 Paul F. Taylor brings his ramshackle sitcom pilot to the stage, convinced it is going to be picked up for TV. Watch his plans collapse spectacularly. The Pauly Show is filmed before a live studio audience! 'The show is brilliant' (Snipelondon.com). 'Beautifully crafted one liners ... astute observational comedy' (GQ). 'Nicely off-beat lines' (Chortle.co.uk). 'Gleeful and insistent silliness' (ThreeWeeks).

Paul F Taylor loves nothing better than lazing on the sofa watching cheesy American sitcoms, with plenty of canned laughter. In his first solo Edinburgh show, newcomer Paul F Taylor, aka Pauly, brings you his very own ramshackle sitcom pilot The Pauly Show Episode One.

Step inside Pauly's regular, everyday life and all its chaotic minutiae; meet his (recurring) friends and neighbours and watch him weave his life around his neatly absurd stand-up routines. Despite having no actual set, no other actors, and a highly questionable script he is utterly convinced The Pauly Show will be picked up for TV but will he pull it off?

The Pauly Show is filmed before a live studio audience!

Paul F Taylor supported Lucy Porter on her 2011 nationwide tour Fools Gold and he has previously appeared at the Edinburgh Festival in the AAA stand-up and big value showcases.