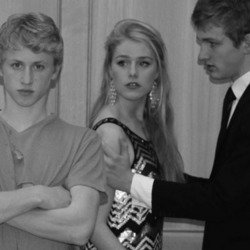 Wealthy, influential civil servant Gavin hosts a party. The conversation is of health clubs, travel and bed-hopping. However, there's unrest beyond the doors, roadblocks and soldiers litter the streets - and what has happened to Jimmy? Pinter's vicious political satire is a stark exposé of class, power and social injustice in modern Britain. 'Seeing Party Time performed by MCS Drama is a thrilling experience. This rarely-seen play is here given all the right mixture of humour (at times it is very, very funny) and menace - You don't know whether to laugh or shudder' Lady Antonia Fraser Pinter.