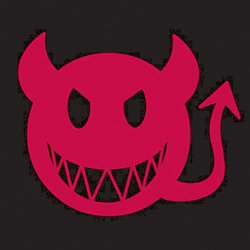 The Oxford Imps are back! Fringe veterans from the city of dreaming spires bring you appropriately inspired comedy magic, entirely based on audience suggestions. Prepare for riotous comic adventure with joke-offs, rap battles and spontaneous sketches, all rounded off with a hilarious improvised play or musical. With wit, charm and panache, these cracking comedians will rock your socks off, Whose Line is it Anyway? style. Get your hands on a ticket. 'Devastatingly funny' (EdfringeReview.com). Suitable for teens and families.

A comedy troupe founded in 2004, inspired by the New British Wave of Improv, the Imps are rapidly becoming one of the most successful independent improvised comedy troupes in the UK.

The Imps are a tight-knit group of competitively auditioned students and locals from Oxford, highly trained in the art of funny. They can be recognised by their ubiquitous logo, a cheeky pink 'Imp' head on a black background.

2012 is the Oxford Imps' NINTH Edinburgh Fringe run, with the show re-vamped to make it bigger and better than ever.

2012 has seen the Imps touring to France and Holland and across the U.S.A. to visit New York, Chicago & Nashville and the world-famous Providence Improv Fest, building on their international acclaim and honing their comedy skills.

This year the troupe return with a scintillating line-up of old stalwarts and new talent, including 2009's So You Think You're Funny? winner, Ivo Graham.

Imps alumni at the Fringe in 2012 are a testament to the comedic mettle of the company - resident Tate Modern artists Robin & Partridge, London improv sensation Austentatious and various prolific young stand-ups can all trace their roots back to the troupe.

During the 2009 Fringe, the Imps were routinely ambushed and chased down the road by the cast of The Fawlty Towers dining experience, in character.