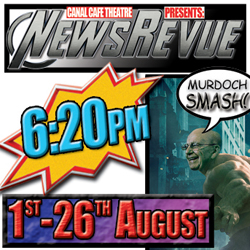 Satire / sketch show performed on the following days in August 2012...

Guinness World Record-breaking Fringe favourites mock the year's news events, mercilessly lampooning those in the public eye. No one is safe - politicians and celebrities alike come under fire in a turbo-charged barrage of bladder-threateningly funny songs and sketches that are so close to the bone you can almost see white. The sing-off between Cameron and Salmond, in a hilarious re-working of Destiny's Child's Independent Women, makes it worth the ticket price alone. This award-winning sketch show is flawlessly delivered by four outstanding performers at lightning speed accompanied by an on-stage musical director. One of the best-reviewed shows, Edinburgh 2011.

The Guinness World record-breaking NewsRevue is back for its 33rd year, and will be celebrating a 33rd anniversary at venue 33 on 18th August.

A compilation of the best material from Canal CafÃ© Theatre's weekly updated London shows, NewsRevue takes a sardonic look back over the biggest events of the year. Expertly written by a 40 strong team from throughout the UK, this is a fast-paced mix of sketches, songs and gags.

Highlights include an unexpected sing-off between David Cameron and Alex Salmond, the Queen in all her Jubilee glory and a re-working of Casablanca that would have Nick Clegg blubbing like a baby. With the eyes of the world on the UK and a certain large scale sporting event, NewsRevue proudly presents the best of British satire.

NewsRevue is flawlessly delivered by four outstanding performers accompanied by an on stage musical director, a post previously held by Bill Bailey. The ones to watch this year are: Luke Coldham, Rebecca Jayne Harper, Oliver Izod and Jenny Bede (who has become a YouTube sensation as a satirical rapper). Directed by Award Winning Director Adam Morley, and with Chris Peake as Musical Director.