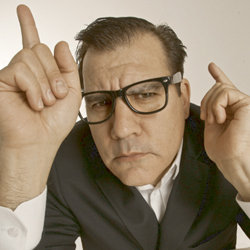 The irrepressible Britain-based New York comic in a new show. Other comics try to push boundaries: He pulls the rug out from under you and himself. He makes fun of others at his own expense. 'I would pay to see Lewis Schaffer' **** (Kate Copstick, Scotsman). 'His shows are unique - quite unlike anything else on the circuit' (Paul Fleckney, LondonIsFunny.com). 'If you consciously choose not to see him don't bother coming to the Fringe' **** (Paul Hampson, Chortle.co.uk). A Malcolm Hardee Award Winner.