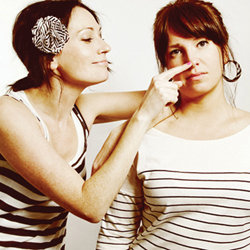 Two girls once decided they might like each other enough to be a double act. Were they right? Join Leads & Stern as they explore their tumultuous comedic relationship. Expect tears, laughter and cathartic role play. Directed by Lee Griffiths (Late Night Gimp Fight). "True comedic chameleons" **** Remote Goat "If you don't love them you have a cold, black heart" ComComedy "Well placed props" ThreeWeeks.

Gemma Leader and Juliette Stern are comedy writers and performers. They've been working together since 2009 and host a successful monthly comedy night in London which attracts a regular line up, including Cariad Lloyd, The Beta Males, Sheeps and The Three Englishmen, to name but a few.

Lee Griffiths is one fifth of Late Night Gimp Fight, nominated for Best Newcomer at the Edinburgh Fringe Festival in 2010 and winners of the 2011 Chortle Award for Best Sketch or Character Act. This is his directorial debut.

Lee Griffiths says: "It is a fantastic opportunity to work with a great up-and-coming double act like Leads & Stern. With the strength of their writing and fresh approach, I think they are in line to have a great festival and am proud to be along on the ride!"