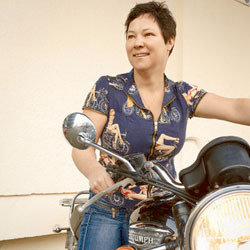 Cheeky northerner Julie Jepson burst onto the comedy circuit in 2005 when she reached the final of the Funny Women Comedy Awards on only her third gig. Ms Jepson is an arresting and animated comedic presence. She mixes bubbly, conversational and wonderfully pithy stage patter with an array of comic voices, persuasively guiding the audience through her curious worldview with a disarming charm. Julie has appeared live on the Richard Hammond 5 O'Clock Show for ITV. A professionally trained actress, she has worked in television, theatre, voiceovers and radio.